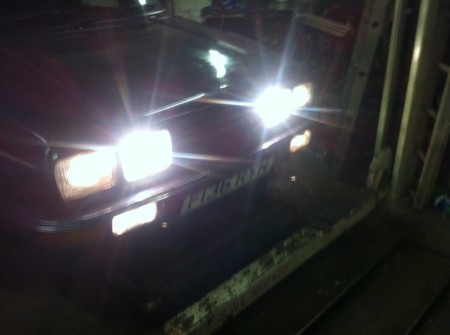 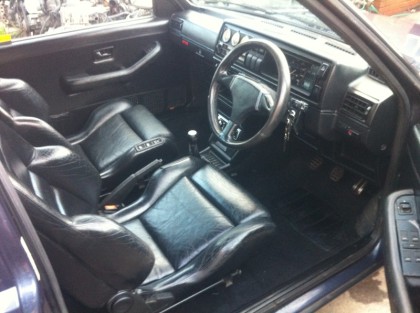 dont drool too much 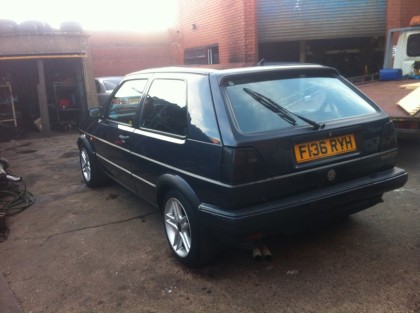 The Oettinger story begins 55 years ago in Frankfurt, Germany. Gerhard  Oettinger obtained his mechanical   engineering degree and, during the end of  WWII, was a test engineer working on Daimler-Benz aircraft. After the war had  ended, the British army was helping the Volkswagen factory resume production of  the original Beetle, and Oettinger began tuning the little dynamos. Oettinger  (the company), like most tuning facilities, had its humble beginnings in a small  garage belonging to Oettingers (the man) parents. The company soon   outgrew  its surroundings, and the multi-storied headquarters now reside in  Friedrichsdorf, just outside Frankfurt, and is easily discernible from the    Frankfurt-Kassel autobahn.

In 1951, the OKRASA acronym   pervaded Oettinger literature. Standing for  Oettinger Kraftfahrtechniche Spezialanstalt (Which means Oettinger Special  Motorcars.MAX), OKRASA   became well-known in the racing world as the ultimate  Volkswagen Beetle tuner. Starting with building progressively larger Beetle  engines, and making the transition in 1964 to working closely with the Wolfsburg  factory, Oettinger had truly   become a player in the German automotive  aftermarket. By 1974, when the Golf was released, Oettingers relationship with  the powers that be at VW had   given him access to new  vehicles

six months  before their official debut.   Oettingers tuning programs and conversions  accompanied the cars to market.

In the late 1970s, Oettinger had   progressed to the point of offering 1.8L  and 2.0L conversions for the GTI and had 16-valve heads in production even  before the factory considered that as an option. The OKRASA head was so good  that it became the solution to VW Frances concern regarding the production of  the Renault 5 Gordini. VW of France had asked the factory for a   more powerful  GTI and, though   turbocharging would have been an   option, engine bays of  turbocharged 1.6L GTIs got too hot. The OKRASA head   retained the standard  cog-tooth belt drive, so it required no modification to the block, and it ran  the second camshaft via a gear and belt off of that cam. From there, OKRASA  Dipl-Ing G. Oettinger GmbH & Co AG (the company), proceeded to tune  Volkswagen vehicles, adding Audi vehicles to the roster over time, and  eventually changing the   companys name to what it is known   today, Oettinger  Technik GmbH.

Oettingers philosophy can be found on its Web site, www.oettinger.de. To    paraphrase: Oettinger believes that the construction of a high-performance  vehicle lies not in pushing every aspect of the   vehicle to its limits, but  harmonizing all parts to create a better automobile without destroying what was  created at the factory and came from the minds of the designers. This has been  and will always be Oettingers philosophy when it comes to the end product the  consumer will   purchase. Peace of mind and customer satisfaction is the utmost  priority.

Also, Oettinger only offers realistic performance numbers. These numbers lie  at the lower end of any possible   tolerances, so that no customer gets less  than what he or she paid for. All conversions and parts come with a worldwide  guarantee to ensure   customer satisfaction. Aside from the high reliability of  the engine products Oettinger develops, the products also   increase output  while either maintaining or improving both the emissions and fuel   consumption.  This environmental consideration comes by carefully modifying the   engine  management

Developed on test and racetracks, in the tradition of careful development of  engine  performance

systems,  are the suspension systems. The elegant alloy wheels are specially designed to  guarantee that there is no guesswork as to whether or not the wheels will  fitthey will, since the offsets and sizing are   specially designed for  Volkswagens and Audis. Further, the functional body styling is developed using  the same   original model used by VW to design the production body pieces. This  keeps   Oettingers tolerances tight and all   aero pieces uniform, fitting  every   vehicle, every time. Oettingers commitment to customer satisfaction is  only   outshone by its commitment to the   production of high-quality, tasteful,  and distinctive products.

we can open early or stay late if appointment is booked.

We can offer you a great special price for a complete inspection!

Find out more about us and our services!